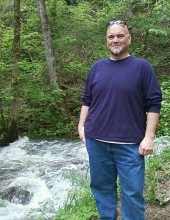 Alan Ray Lusso of Harrisonville, Missouri was born October 7, 1967 in Independence, Missouri the son of Robert Ray and Barbara Gale (Johnson) Lusso. He departed this life on Wednesday, July 21, 2021 at Research Medical Center, Kansas City, Missouri at the age of 53 years, 9 months and 14 days.

On December 12, 2014 Alan was united in marriage to Cynthia Ann Winters, in Independence, Missouri.

Alan was employed as a maintenance supervisor for Yarco, Company, Kansas City, Missouri. He enjoyed antique shopping, collecting knives and guns, going on long walks on nature trails and taking Sunday drives. Alan had lived in Independence before moving to Harrisonville.

The family suggest that memorial contributions may be made to the Alan Lusso Memorial Fund.
To order memorial trees or send flowers to the family in memory of Alan Ray Lusso, please visit our flower store.