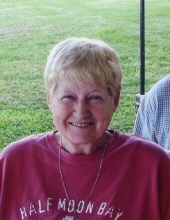 Annette Taylor, 81, of Harrisonville, departed this life on June 23, 2021. Annette was born on March 20, 1940 and was preceded in death by her husband, Richard Taylor, and daughter Debra Truninger.

On August 30, 1968 she was united in marriage to Richard Taylor. She had five children.

Annette worked most of her career at Western Electric/AT&T in Lee’s Summit MO, and then at the Cass County courthouse in Harrisonville, where she worked for 15 years before her retirement. Annette made friends wherever she worked and wherever she went, and enjoyed lifelong friendships. She was known for her generosity, kindness, hugs, her love of reading, sending greeting cards and family group texts.

Annette will be put to rest next to Richard in Harrisonville, and had planned a private graveside memorial for immediate family.

Arrangements are under the care of Dickey Funeral Home, Harrisonville, Missouri.

The family requests donations to KC Hospice House or to St. Jude’s in lieu of flowers, in care of Dickey’s Funeral Home, P.O. Box 432, Harrisonville, Missouri 64701.
To order memorial trees or send flowers to the family in memory of Annette Taylor, please visit our flower store.