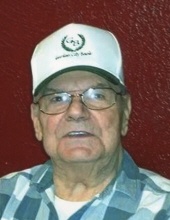 Arthur “Art” Donald Dorrell of Garden City, Missouri was born August 15, 1936 in Roscoe, Missouri the son of Maxwell and Maude Isabelle (McIntire) Dorrell. He departed this life on Wednesday, April 17, 2019 at Research Medical Center, Kansas City, Missouri at the age of 82 years, 8 months and 2 days.

On April 12, 1974, Art was united in marriage to Beverly Maxine (Redpath) Shepard in Blue Springs, Missouri.

Besides his parents, he was preceded in death by his wife, Beverly Dorrell on February 17, 2019; 3 brothers, Cecil, Jewell and Charlie Dorrell and a sister, Myrtle Baxter.

Family suggests memorial contributions may be made to the American Lung Association.
To order memorial trees or send flowers to the family in memory of Arthur "Art" D. Dorrell, please visit our flower store.