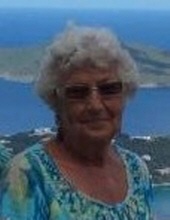 Barbara Ann Castle, of Harrisonville, Missouri was born March 12, 1937 in Brawley, California the daughter of Henry Edward and Vida Mae (Rider) Collins. She departed this life on Thursday, December 2, 2021 at the Cass Regional Medical Center, Harrisonville surrounded by love and family at the age of 84 years, 8 months and 20 days.

On September 25, 1954, Barbara was united in marriage to Charles Lee Castle in Afton, Oklahoma.

Barbara was employed as a Food Service Director for Cass Midway R-1 School District and the Harrisonville Cass R-5 School District. She enjoyed swimming, traveling, going to the beach, cooking, gardening, canning and playing solitaire. Barbara loved going to her water aerobics class at the Harrisonville Community Center, going with the group for their breakfast outings and her dog Boo. She had lived in Kanas City, Missouri before her and Charles moved to the farm near Cleveland, Missouri 1970.

Besides her parents, she was preceded in death by her husband, Charlie Castle on November 15, 2012; her daughter, Shaloy K. Higgins; a grandson, Colby; a brother, Carroll Collins and a sister, Doris Bell.

Family suggests memorial contributions may be made to the Cass Midway Baseball and Softball Booster Club.
To order memorial trees or send flowers to the family in memory of Barbara Ann Castle, please visit our flower store.