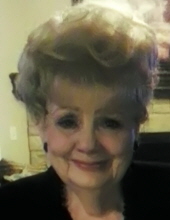 Beverly was a 1954 graduate of Pleasant Hill High School.

Beverly was a homemaker, very devoted and loving wife, mother, and grandmother. Prior to her marriage, she had been employed as an administrative assistant for Mobil Oil and the Panhandle Eastern Pipeline Co. She was a member of the First Baptist Church, now Grace Family Fellowship, of Pleasant Hill. Growing up she enjoyed riding horses, playing the piano and was a Pleasant Hill High School Drum Majorette. She enjoyed spending time with friends and family, especially her grandchildren, flower gardening, bird watching, playing the piano, and her beloved dogs.

She was also preceded in death by her parents and one brother, Donald Floyd Dinges.

She is survived by her daughter, Julie (and Doug) Duffield of Lee’s Summit; two sons, Greg (and Sally) Clark of Raymore, Missouri, and Tim (and Linda) Clark of Greenwood, Missouri; three grandsons, Kevin Clark, Christopher (and Lacey) Clark, and Nickolas Clark, all of Lee’s Summit; two great grandchildren, twins Maeve and Nolan Clark, both of Lee’s Summit; sister-in law Paula Dinges of Pleasant Hill; many other relatives and cherished friends. Also surviving are her beloved dogs, Skippy and Bandit, and grand-dogs Lacey and Beau.

Visitation will be held from 10:00 a.m. until service time.