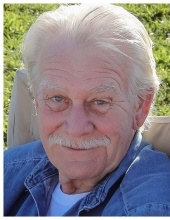 Bill was born January 21, 1948 in Leon, IA and was the son of James and Maxine (Bigley) Cox. Bill married Connie Groves and from this union had daughter Stacy (Cox) Kendrick. Later he married Patty Mullins and had daughter Jessica (Cox) Parsons. In 1977 he married the love of his life, Dianna (Pipes) Nickell and they were happily married for 28 years until Dianna’s passing in 2005. Joining Bill’s extended family were Dianna’s children, Genia (Nickell) Boyle and Robert Nickell.

Bill attended Ruskin High School in Kansas City, MO, in the class of 1965. For many years he was owner/operatorof Cox Wallcovering in Kansas City, MO. He and Dianna also owned/operated together the Red Barn Nursery in Belton, MO, Lincoln Antique Mall in Lincoln, MO, they ran a food truck that sold amazing smoked brisket and apple sausages, both made from their own secret recipe, and homemade ice cream. Bill later began making and selling tubs of “Bill’s Homemade Ice Cream” to various businesses.Bill and Dianna loved fishing and traveling together. Bill was an avid fisherman and took every possible opportunity to fish for trout and crappie.

Bill was preceded in death by his wife Dianna, his parents Jim and Maxine, and two brothers Butch Cox and Bob Cox.

A Celebration of Life Gathering was held, Saturday, September 21, 2019 at his daughter's house in Garden City, Missouri.

In lieu of flowers, the family requests donations be made to Serenity Hospice or the Alzheimer’s Association.
To order memorial trees or send flowers to the family in memory of Billy D. Cox, please visit our flower store.