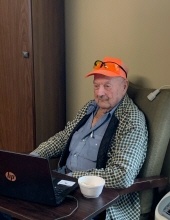 Carl Jerry Chamberlain, of East Lynne, Missouri was born May 13, 1929 the son of Aaron and Eva Pearl (Baker) Chamberlain. He departed his life on Tuesday, August 24, 2021 at Edgewood Manor Nursing Home, Raytown, Missouri at the age of 92 years, 3 months and 11 days.

On July 15, 1946, Carl was united in marriage to Blanchie Marie Hartsell in Mound City, Kansas.

Carl was employed as a repairman for General Motor’s Leeds Plant, Kansas City, Missouri until his retirement on May 16, 1982. He was a member of the UAW Local #710, Kansas City. He and Blanchie were fond of getting in the truck and taking road trips that took them all over.
Carl was known as a hard worker and taught his kids how to work on and maintain their vehicles. He loved to hunt, fish and most importantly his family and having get togethers.

Besides his parents, he was preceded in death by his wife, Blanchie Chamberlain on March 11, 2002; two sons, Carl and Sidney Chamberlain; a daughter, Deanna Chamberlain; an infant son; a granddaughter, Misti Nichol; a grandson, Jonathan Hammond; two great-grandsons, Shawn Baumgarden and Nathan Chamberlain; 9 brothers and sisters.

Funeral services were held Wednesday, September 1, 2021 at the Dickey Funeral Home, Harrisonville, Missouri with burial in the Clearfork Cemetery near Garden City, Missouri.

Masks are optional to attend the service.

In Memory of Carl and his daughter, Deanna Chamberlain there will be a Celebration of Life Gathering starting at 1:00 p.m. on Saturday, September 11, 2021 at the East Lynne City Hall, 402 W. Main, East Lynne, Missouri 64743. Please bring a covered dish.
To order memorial trees or send flowers to the family in memory of Carl J. Chamberlain, please visit our flower store.