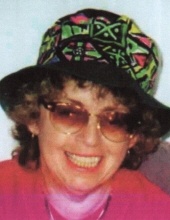 Carol was born in Toledo, Ohio, and moved to Missouri in 1947. She attended Hickory Grove Elementary School and Pleasant Hill High School where she graduated in 1956.

On September 23, 1966, she was united in marriage her high school sweetheart Samuel Lee Harvkey in Kansas City. To this union two sons, Steven and Michael were born.

Carol returned to school in 1978 attending Avila College in Kansas City, where she earned a Liberal Arts degree with Honors in 1982.

She was a member of the United Methodist Church and was an active member of the Order of the Eastern Star serving as Worthy Matron of Ivy Leaf Chapter #215, Pleasant Hill in 1974.

She and Sam enjoyed traveling in their RV for several years after they retired finally settling in Yuma, Arizona in 1999. They moved back to Missouri in 2019 to make their home.

Carol was preceded in death by her parents Buck and Lilly, and one sister Anita Parris.

Cremation has been accorded. A memorial graveside service will be held at a later date. Inurnment will be in the Pleasant Hill Cemetery.