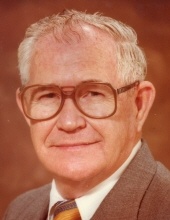 Charles Edward Pendleton of Garden City, Missouri was born August 24, 1929 the son of Ernest Truman and Agnes Mary (Hull) Pendleton of Spring Garden, Missouri. He departed this life on Friday, January 10, 2020 at Redwood of Raymore.

On July 16, 1954, Charles was united in marriage to Evelyn Ann Greenwell at the Baptist Church in Belton, Missouri.

Charles was hired January 18, 1955 as a plater for Bendix and a farmer at the same time then later a fireman for Bendix/Honeywell and retired on March 19, 1984.

Charles and Evelyn first moved to this area on a farm in Creighton, Missouri and then a second farm in Garden City, Missouri before finding their home in town in Garden City where they have been the last 50 years of their lives. While in Garden City, Charles was a on the volunteer fire department and civil defense, and a fireman at the State Fair in Sedalia, Missouri. Charles was a shriner in the 60’s and 70’s and a mason for 56 years.

Besides his parents, he was preceded in death by his sister, Doris Clark; brother, Richard Pendleton and son, Daniel Pendleton on June 22, 2012.

Family suggests memorial contributions may be made to Integrity Hospice.
To order memorial trees or send flowers to the family in memory of Charles E. Pendleton, please visit our flower store.