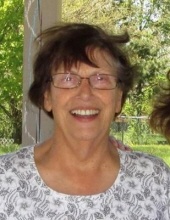 Charlotte attended high school in Mission, where she worked as a secretary after graduation.

In the summer of 1962, Charlotte married Jim Adkins and moved to Cass County, Missouri. In her initial years of marriage, she devoted time to her children, also working as a playground supervisor and real estate agent. Charlotte spent many years as a bookkeeper and office manager in the propane business. She enjoyed working outdoors and spent countless hours landscaping and beautifying her home and garden.

Cremation. A private family celebration of life service will be held at a later date.

Funeral arrangements are under the direction of the Dickey Funeral Home, Harrisonville, Missouri.
To order memorial trees or send flowers to the family in memory of Charlotte M. Adkins, please visit our flower store.