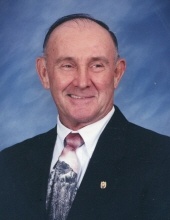 Clarence Emery Gabriel of Harrisonville, Missouri was born January 14, 1931 in California, Missouri the son of Samuel Emery and Bessie (Oesterly) Gabriel. He departed this life on Sunday, November 18, 2018 at the age of 87 years, 10 months and 4 days.

On August 12, 1966, Clarence was united in marriage to Betty Gail Shadwick in Vinita, Oklahoma.

Clarence was a 4 year veteran of the United States Air Force. He moved to the area in 1956 and went to work at Richards Gebaur Air Force Base until he retired in 1986. Encouraged by his work on planes, he went on to acquire his pilot's license and owned several planes over the years. Clarence also enjoyed working on old cars and trucks fixing them up and showing some in car shows where he won several trophies. He also enjoyed riding motorcycles with Betty and they joined the Gold Wing club and traveled with the club for several years. They also enjoyed traveling in their RV, Bus trips and Cruises. Clarence loved animals and had several over the years including cats, German Shepards, Longhorns of which he had 4 and liked to show people he could hand feed them french fries, and slices of bread. His last pet was his horse Smokey which he trained and doted over. He and Betty were members of several Baptist churches in the area and made friends with many

Besides his parents, he was preceded in death by sisters Goldie Gabriel, and Ida Gabriel Fulks.

The family received friends November 21, 2018 at the Dickey Funeral Home with the funeral service at 10:30 a.m.

Family suggests memorial contributions may be made to the Ministerial Alliance of Harrisonville, Missouri.
To order memorial trees or send flowers to the family in memory of Clarence E. Gabriel, please visit our flower store.