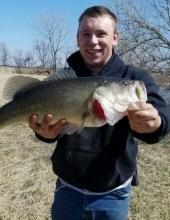 On August 25, 2018, he was united in marriage to Lindsey Michelle Harbison at Unity Village in Lee’s Summit.

Daniel was employed as a Chimney Sweep for the Clutters Chimney Cleaning Company. He enjoyed spending time outdoors hunting, target shooting, and fishing. He also enjoyed mudding and working on his truck. He loved music, often sending random songs to all his family. He was an animal lover especially his pet turtles and fish.

Daniel was preceded in death by his paternal grandparents, Howard and Elinor (Miller) Webster; and his maternal grandfather, Bob Legg.

A celebration of Daniels life will be held 11:00 a.m. Tuesday, March 9, 2021, at the funeral home. Inurnment will be held in the Pleasant Hill Cemetery at a later date.