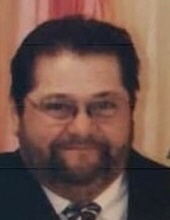 Thursday, November 22, 2018 was a very tragic day for the Harris’s family. Danny, a member of our beloved family died far too soon. He had a lot left to accomplish and it is sad he isn’t here with us. However, the focus should not be on grief, but instead the celebration of his life.

Daniel Wade Harris (Danny), 59, of Garden City, Missouri, passed away Thursday, November 22, 2018 at Research Medical Center surrounded by his family and loving wife of 27 years.
Danny was born March 19, 1959 in Harrisonville, Missouri to Marvin Dean and Frankie Delores (Leuty) Harris. He was a 1977 graduate of Sherwood High School. He joined the U.S. Navy in 1977 and served aboard the USS Albany in Europe. He was united in marriage to Tina Michelle Pate on December 29, 1990 in Overton, NV.

Danny worked as a construction supervisor for Marley Cooling Towers until his retirement.

He is preceded in death by his son, Derrick Wade Harris.

He is survived by his parents; Dean and Delores Harris, his loving wife; Tina, His two daughters; Brandy and Christina. His two sisters; Rhonda Hernandez (David) and Janet Milburn, His two brothers: Jimmie (Sheila)Harris and Frankie Harris. His grandchildren; Matthew, Caitlyn, and Micah. As well as his many nephews, nieces and great nieces/nephews, cousins, and wonderful friends.

Danny enjoyed the company of his friends, meeting new people and spending time with the family he loved. He was a loving son, brother, husband, father and grandfather (PA-PA) and will never be forgotten.

“Blessed are they that mourn, for they shall be comforted, “ Matthew 5:4

Funeral services were held Wednesday, November 28, 2018 at the Dickey Funeral Home, Garden City, Missouri with burial in the Byler Cemetery near Creighton, Missouri.

The family received friends Tuesday, November 27, 2018 at the funeral home.
To order memorial trees or send flowers to the family in memory of Danny Harris, please visit our flower store.