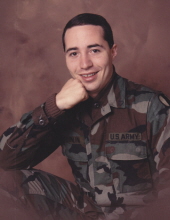 In 1995 he was united in marriage to Tracy Hilty; they later divorced.

David was a 1984 Southwest High School graduate. He proudly served as a Linguist in the United States Army from 1988 to 1992. He was later employed as a Car Salesman for several area dealerships. He was an avid mushroom hunter.

He is survived by his father and stepmother Brent and Connie Moorman of Pleasant Hill, Missouri; his mother and stepfather, Janet and Olen Montgomery of Raytown; one daughter, Caelyn Hilty of Deepwater, Missouri; one sister, Jody Moorman of Overland Park, Kansas; one half-brother, Craig Welch of New London, Connecticut, three step-brothers, Steve Montgomery of Ft. Myers, Florida, Scott Montgomery of Kansas City, and Charlie Gallipeau of Portland, Oregon; four step-sisters, Valerie Montgomery and Renee Montgomery both of McKinney, Texas, Michele (and Jim) Markey of Lee’s Summit, and Carole (and Bill) Markey of Pleasant Hill; other relatives and friends.

Cremation has been accorded. A memorial service will be held at a later date. Service times will be published here as soon as that information becomes available.

Memorial contributions are suggested to a veteran’s charity of the donor’s choice.