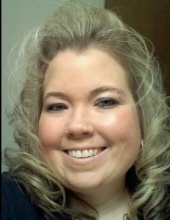 Heaven gained a special Angel when Deana Kay Stewart joined her Heavenly Father on Thursday afternoon, January 6th, 2022 at age 47. She lost her five-month battle with the effects of Covid 19 and double pneumonia.

Deana was born in Kansas City, MO on August 28, 1974. Her early childhood was spent in Harrisonville before eventually moving to Pleasant Hill in 1981 and graduating from Pleasant Hill High School in 1992. From there she went on and attended Longview Community College and cosmetology school.

Deana and Michael Stewart were united in marriage on July 19th 2003. In addition to being an out-standing wife and mother, she cared for many children over the years with her in home daycare service. She also worked as a bank teller, most recently at Goppert Financial of Pleasant Hill until falling ill.

She was preceded in death by her paternal grandparents Amos and Frances Bass, maternal grandfather Harold Jaynes, and infant brother Travis Glen, all of Harrisonville.

She is survived by her father, Thomas Bass with wife Carla of Jefferson, Texas and mother, Karen Jaynes of Harrisonville.
She leaves behind her beloved husband Michael Stewart, daughters, Makayla Nicole,Chrissy and Jeannie Stewart and son, Dalton Wayne Thomas Stewart;along with a foster son Chris Angerman. She is also survived by her brother Justin Bass with wife Rachel; nephew Brayden Bass, niece Summer Bass, nephew and niece Wyatt and Natalie Sheppard. She also leaves one behind a stepsister Cara Marin Blackburn, along with niece and nephew Aubrey Blackburn and William Cody Chastain.
Many aunts, uncles and cousins, and friends will also cherish the memories they share of Deana.

Services will be held at Dickey Funeral Home on Tuesday January 11, 2022 at 10:00 a.m. Burial will follow the services at the Orient Cemetery in Harrisonville.

Visitation will be held at Dickey Funeral Home on Monday January 10, 2022 from 6:00- 8:00 p.m.
To order memorial trees or send flowers to the family in memory of Deana Kay Stewart, please visit our flower store.