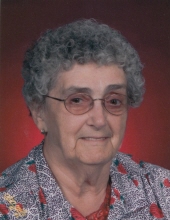 Doris was united in marriage to Samuel Wright and later married Howard McKee.

Doris was a homemaker. A faithful member of Sycamore Grove Mennonite Church, Garden City, Missouri where she enjoyed taking part in church activities. She enjoyed crocheting and making items for the annual MCC sale until her eye sight began to fail. She liked to travel visiting family and friends and attending family gatherings. Doris was a Pink Lady at Cass Regional Medical Center, Harrisonville until her health would not let her volunteer anymore. She had lived in Garden City and Harrisonville and Holden, Missouri before moving back to Harrisonville in 1982.

Besides her parents, Doris was preceded in death by her two husbands, Sam and Howard, two brothers, Orville and Wayne Stutzman; two sisters, Lela Gudde and Freda Hochstetler.

The family suggest that memorial contributions may be made to the Sycamore Grove Mennonite Church Memorial Fund.

A complete obituary will be posted here as soon as that information becomes available.
To order memorial trees or send flowers to the family in memory of Doris Jean McKee, please visit our flower store.