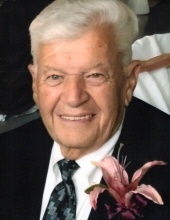 On August 6, 1960, he was united in marriage to Betty Sue Huff at the Broadway Baptist Church in Kansas City. She preceded him in death on October 18, 1993.

Earl was employed as a Union Carpenter for J.E. Dunn Construction and had also worked for Greater Kansas City Roofing. He was a member of the Carpenters Union Local #777 and was a member of the Grace and Truth Baptist Church in Pleasant Hill. He enjoyed fishing, shopping and his TV shows; the Price is Right and Judge Judy were some of his favorites. His absolute favorite thing to do was watch all of his grandchildren participate in their respective sports and activities. Earl would never get tired of being at a softball game.

Earl was known by everyone for his friendly and fun spirit. He was always laughing and smiling. Earl was very loved by all that knew him. He never met a stranger and could talk about any subject. He was highly respected at J.E. Dunn for being a hardworking, knowledgeable employee. He was very good with his hands. He could build or fix anything whether it be carpentry, plumbing, electrical or mechanical work. Earl did many weekend construction jobs for his best friend, Charlie Clark. He has maintained over a 50 year friendship with Charlie.

He was very loved by his own 6 grandchildren and was so proud of all of them. He had countless other “grandchildren” that lovingly referred to him as Papa Shifflett. He talked about them frequently and it would light up his day when one of them would run up and give him a hug. He was so kind and generous. He will be greatly missed by his friends and family.

Earl was also preceded in death by his parents and brother, Robert Pollard.

A celebration of Earl’s life was held Sunday, July 19, 2020, at the King City First Christian Church.

Memorial contributions are suggested to the Pleasant Hill Lay-Clergy Love Fund or the King City Ministerial Alliance and may be sent in care of the funeral home.