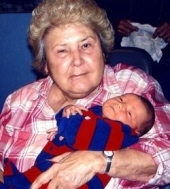 Mrs. Eva Lucille French of Drexel, Missouri was born June 26, 1929 in Weatherbey, Missouri the daughter of Arthur Alva and Evalena (Carey) Wright. She departed this life Wednesday, November 7, 2007 at the age of 78 years, 4 months and 11 days.
On July 28, 1984, Lucille was united in marriage to James Leroy French in Independence, Missouri.
Lucille was a homemaker. She was earlier employed at Mission Plastic and Lakeside Hospital both of Kansas City, Missouri and was a sales clerk for the TG&Y Store, Grandview, Missouri. Lucille was a member of the First Christian Church, Drexel, Missouri. She enjoyed her family, sewing, painting and cooking. She had moved to Drexel in 1989.
Besides her parents, she was preceded in death by her daughter, Linda Arlene Moffett; an infant brother, Alva Don Wright and a sister, Marjorie Seaman.
She is survived by her husband, James L. French of the home; a daughter, Tina Thompson and husband, Clifton, Archie, Missouri; two granddaughters, Jennifer Cooper and Rachael Thompson; a great-grandson, Hunter Cooper; two brothers, Don Wright and Merle Wright both of Independence, Missouri; other relatives and many friends.
Funeral services were held Saturday, November 10, 2007 at the Dickey Funeral Home, Harrisonville. Cremation.
To order memorial trees or send flowers to the family in memory of Eva French, please visit our flower store.