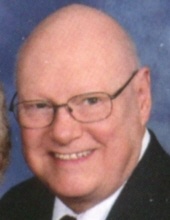 Fred H. Davis, of Harrisonville, MO died on September 26, 2021 at St. Luke’s Hospital in Lee’s Summit, MO. While born in Topeka, he spent most of his growing up years on a farm north of Rossville, Kansas. Being a farm-boy, he learned the value of hard work. He developed a love for singing while driving a tractor, he said, because tractors in those days did not have radios. Later he sang solos at Christian gatherings and was a song leader in more than one church.

He came to personal faith in Christ through Topeka Youth For Christ while still in high school. After graduating from Rossville Rural High School in 1962, he attended Kansas State University where he graduated with a degree in Chemistry and Secondary Education. He was active in Inter-Varsity Christian Fellowship (IVCF) at K-State and was chapter president his senior year. He also attended numerous IVCF camps at Bear Trap Ranch in Colorado Springs; Urbana Missionary Conferences in Champagne, IL, etc.

Fred had a contagious sense of humor and a laugh where his face would turn red and his shoulders shake. He was like an old pair of shoes that wore extremely well.

He was also mechanically inclined and loved to tinker and fix things, especially cars. Once he rebuilt the carburetor on his car, and when he put the lid over the carburetor air filter, unbeknown to him, a fly got trapped inside the carburetor and the head of the fly got sucked into one of the fuel inlets which hindered the flow of gas and made the car run rough. After trying unsuccessfully numerous times to solve the problem Fred finally took it to a professional mechanic who discovered what happened. He never did live that down.

Fred later attended Midwestern Baptists Theological Seminary in Kansas City, MO and became music director and educational director at several Baptist churches. During this time he met Ruth Krauss and they were married in August of 1969. In August they celebrated their 52th anniversary. She survives in Harrisonville, MO.

Fred was way ahead of the curve when it came to computers. He started his own computer type-setting business where he would do business cards, fliers, brochures and about anything printed for individuals or businesses.

He and Ruth enjoyed traveling to visit family in Kansas and Texas, as well as attending Christian concerts at Silver Dollar City and in Kansas City. Their "best ever" trip was to Israel a few years ago.

One of the most life-changing things in Fred’s life occurred when he attended Focus Seminary in Kansas City, which was a personal-growth seminar patterned after a similar seminar founded by “Dr. Phil” McGraw (before he became a TV celebrity). Soon another similar, but more Christian-based seminar, began in Kansas City called Grace Adventure. Fred was on the leadership team of Grace Adventure for many years, where he impacted literally hundreds of lives. He was dearly loved.

A graveside celebration of life service for Fred will be held at the Rossville Cemetery, about 20 miles west of Topeka, at a later date to be announced.

Memorial gifts in remembrance of Fred may be sent Samaritan’s Purse. you can find giving information online at samaritanspurse.org. Thank you, and please keep Ruth in your prayers.

Funeral arrangements are under the direction of the Dickey Funeral Home, Harrisonville, Missouri.
To order memorial trees or send flowers to the family in memory of Fred Henry Davis, please visit our flower store.