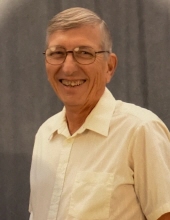 On May 21, 1977, Gary was united in marriage to Judy Ann Johnson in Elmhurst, Illionis.

Gary was a truck driver and last worked for Warren Transport in Waterloo, Iowa.

Besides his parents, he was preceded in death by a son, Herbert "Herbie" Newell on July 30, 2018.

Local arrangements were under the direction of the Dickey Funeral Home, Harrisonville, Missouri.
To order memorial trees or send flowers to the family in memory of Gary S. Newell, please visit our flower store.