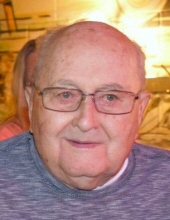 Gene was born on September 2, 1928, in East Lynne, Missouri the son of Charles Fern and Grace Edna (Smith) Wagner. He had three sons from a previous marriage and married Donna Hammond on January 6, 1967. They made their home in the Harrisonville area for years before moving to El Dorado Springs, MO to raise longhorn cattle. They eventually sold the farm moving to Nevada, Missouri. He served in the army during the Korean War, retired from Western Electric Lee’s Summit (AT&T), was a master Mason, enjoyed raising longhorn cattle and being a member of the Longhorn Association during retirement. He enjoyed singing for the Lord either at home or at church and he loved people.

Gene was preceded in death by his parents Fern and Grace Wagner; his son Charles and his sisters, Dottie Bea, Barbara and Peggy.

Visitation will be 10-11 AM Saturday, August 21, 2021 with a Masonic Service at 11:00 AM with funeral services to follow at the Dickey Funeral Home in Harrisonville, Missouri. Burial with Military Honors will be at Floral Hills East Cemetery in Lee’s Summit, MO.

In lieu of flowers, the family suggests contributions to the DAV (Disabled American Veterans), the Missouri Baptist Children’s Home or the Masonic Home.

Funeral arrangements are under the direction of the Dickey Funeral Home.
To order memorial trees or send flowers to the family in memory of Gene Wagner, please visit our flower store.