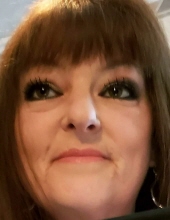 Helen Marie Van of Garden City, Missouri was born October 12, 1968 in Santa Ana, California the daughter of Thomas Richard and Georgiana (Pickens) Johnson. She departed this life on Wednesday, June 23, 2021 at her home at the age of 52 years, 8 months and 11 days.

On March 5, 1998, Helen was united in marriage to David Alvin Van in Garden City, Missouri.

She was preceded in death by her mother.

Helen is survived by her husband, David Van and son Brandon Van both of the home; a daughter, Breanna Van, Harrisonville, Missouri; a granddaughter, Amari Lynn; her father and step-mother, Thomas "Tom" Richard and Wendy L. Johnson, Garden City, Missouri; a brother, Thomas George Johnson, Bolivar, Missouri; other relatives and many friends.

They are asking if you attend, please bring a side dish for everyone to enjoy.

Funeral arrangements are under the direction of the Dickey Funeral Home, Harrisonville, Missouri.
To order memorial trees or send flowers to the family in memory of Helen Marie Van, please visit our flower store.