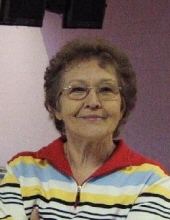 Helen Ruth Funk of Peculiar, Missouri was born July 18, 1937 in Perry, Missouri the daughter of William and Rachel (Taylor) Jackson. She departed this life on Sunday, May 16, 2021 at Meadowview Health and Rehab, Harrisonville, Missouri at the age of 83 years, 9 months and 28 days.

On October 14, 1951, Helen was united in marriage to Walter Neil Funk Sr. in Miami, Oklahoma.

Helen was employed as a waitress for many years until age 69. Later she was employed as a cafeteria lady for the Ray-Pec Elementary School. Helen loved growing a flower garden, enjoyed sewing, doing crafts and was a good cook. She was a great mother, grandmother and great-grandmother.

Besides her parents, she was preceded in death by her husband, Walter Funk Sr. on February 23, 1987; a grandson, Jason Neil Funk and four brothers, J.W., Richard, Carl, and Billy Joe Jackson.

A Memorial Graveside Service will be held at a later date at the Forest Hill Cemetery, Kansas City, Missouri.

Funeral arrangements are under the direction of the Dickey Funeral Home, Harrisonville, Missouri.
To order memorial trees or send flowers to the family in memory of Helen Ruth Funk, please visit our flower store.