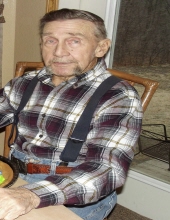 Herman Levie Sites of Creighton, Missouri was born February 3, 1934 near Urich, Missouri the son of JohnTheodore and Lucy Mae (Crotchett) Sites. He departed this life on Thursday, January 4, 2018 surrounded by love and family at the Kansas City Hospice House, Kansas City, Missouri at the age of 83 years, 11 months and 1 day.

Herman was united in marriage to Sylvia Joan Kelly on August 27, 1955.

Herman was employed for 28 years for the Gas Service Company, Kansas City, Missouri until his retirement in 1993. He and his wife, Joan owned and operated Sites Service Gas and Convenience Store in the Creighton Community for 13 years. Herman was a faithful member of the Creighton United Methodist Church, an Army veteran, a 49 year member of Index Masonic Lodge AF & AM, Garden City, Missouri. He was a lifelong area resident. For many years, Herman and Joan were caretakers and Board Members for Grant Cemetery near Creighton.

Besides his parents, Herman was preceded in death by a grandson, Kelly Wilson and 3 brothers, Max, Milton and Everett "Fuzz" Sites.

Funeral Services will be held Monday, January 8, 2018 at 10:30 a.m. at the Dickey Funeral Home, Garden City, Missouri with burial in the Grant Cemetery near Creighton, Missouri.

The family suggest that memorial contributions may be made to the United Methodist Church Memorial Fund Creighton, Missouri or the Grant Cemetery Association.
To order memorial trees or send flowers to the family in memory of Herman Levie Sites, please visit our flower store.