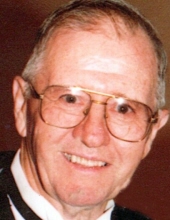 Hubert Mitchell Wyatt, 97, of Greenwood, was born, February 21, 1923, in Paonia, Colorado, the son of David L. and Sally (Reed) Wyatt. He departed this life, Sunday, November 1, 2020, at his home in Greenwood surrounded with love and family.

He was a World War II United States Army Veteran.

Hubert was employed as a Union Electrician through the I.B.E.W. Local #124. He was a member of the Lee’s Summit Veterans of Foreign Wars Post #5789. He enjoyed hunting, fishing, collecting antiques and loved Colorado. He was a charismatic person who had the gift to gab and loved visiting with people.

Private family services were held. Interment was in the Pleasant Hill Cemetery.