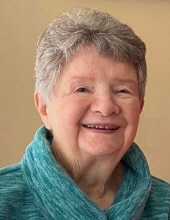 Mary Ilene Woodcock, 91, of Lone Jack, Missouri, was born, February 22, 1930, in Blue Mound, Kansas, the daughter of Ira Eugene and Pearl (Simpson) Townsley. She departed this life Monday, October 4, 2021, at her home surrounded with love and family.

On August 14, 1948, she was united in marriage to Herbert Melvin Woodcock in Blue Mound. He preceded her in death in October 1996.

Ilene was a bookkeeper for Ralston & Purina and for Waldo Grain Company. She later worked as a school nurse for the Lone Jack School District and was a greeter at the Walmart on 291 in Lee’s Summit. She was also an excellent seamstress. She and Herbert spent eleven years traveling the United States in their Airstream trailer. She enjoyed playing the organ, sewing, making polyester double knit rugs, visiting museums, and was an avid Royals fans. She especially loved spending time with her grandchildren.

Ilene was also preceded in death by her parents and one sister, Donna Regehr.

She is survived by her daughter, Jacqueline Bass of Lone Jack; granddaughter, Jennifer (and Dan) Janssen of Lone Jack; three great grandchildren, Jarrett Janssen, Ben Janssen, and Bre Janssen, all of Lone Jack; two sisters, Rita Gillman of Grove, Oklahoma, and Karyn Bower of Pleasant Hill; other relatives and friends.

A memorial service will be held 7:00 p.m. Wednesday, October 6, 2021, at the funeral home. Reverend D. Kent Deubner will officiate. Inurnment will be in the Bronson Cemetery, Bronson, Kansas at a later date.

Memorial contributions are suggested to the Susan G. Komen Foundation and may be sent in care of the funeral home.