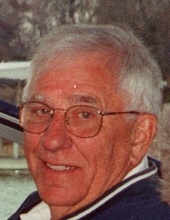 John Robert “Jack” Jury, 88, of Overland Park, was born July 6, 1930, in Topeka, Kansas, the son of William H. and Lelia (Franklin) Jury. He rallied beautifully on Saturday, May 11th with his immediate family close to him as he listened to stories of past and present. Though he could no longer speak, we heard his affirmation loud and clear. On Monday, May 13, 2019, he passed away peacefully, at his residence in the Tallgrass Creek Retirement Community after a year-long battle with cancer.

Jack was a 1948 graduate of Topeka High School and a 1953 Kansas State University graduate, where he was a member of Sigma Phi Epsilon and served as the chapter President. Following completion of his Army ROTC program, he was commissioned a second lieutenant and went on to be a high-altitude trainer for the infantry. On May 1, 1954, he married Virginia Ann Currie of Wichita, Kansas, whom he had met at Kansas State. She preceded him in death on September 25, 2000.

Jack joined Southwest Grease & Oil in Wichita early in his business career, eventually holding various executive positions in Kansas City, Compton, California, and finally in Olathe as its President and Chief Executive Officer, and thereafter as Executive Vice President/General manager after its sale to Witco Chemical. He was a former member of the Kansas City Rotary.

He was preceded in death by his wife Ann of 46 years and his sister Kay Baskett.

He is survived by: his current wife Betty; one daughter Cathy Jury of Overland Park; two sons, Cliff (and Ann Frances) Jury of Dallas, Texas, and Scott (and Sonya) Jury of Kansas City, Missouri; two grandchildren, Helen Jury and Andrew Jury, both of Dallas, Texas; one brother Bob (and Karen) Jury of Hiawatha, Kansas; other relatives and friends.

A celebration of Jack’s life was held on Friday, May 17th at Tallgrass Retirement Community, 13800 Metcalf, Overland Park, Kansas.

In lieu of flowers, donations can be made to the Jack Jury Memorial fund in honor of Sigma Phi Epsilon Fraternity at Kansas State University through Kendall State Bank, P.O. Box 188, 406 Broadway, Valley Falls, Kansas 66088-0188 or to one’s charity of choice.