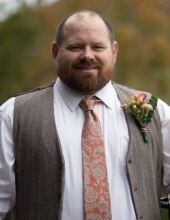 Jason was a 1994 Lee’s Summit High School graduate. He went on to earn his Associates degree at the Longview Community College.

On February 15, 2003, he was united in marriage to Jennifer Cartmill in Topeka, Kansas, and to this union two children, Brandon and Jeremy James were born; they later divorced but remained friends and focused on successfully co-parenting their sons. On October 24, 2020 he was united in marriage to his high school sweet heart, Amie K. (Harvkey) Cortinas in Branson, Missouri. Although married such a short time, their deep love for each other will last for her lifetime.

Jason was employed as an Engineer on the BNSF Railroad. He was a member of the Rail Road Union Local #75. He was also a longtime member of the LifeQuest Church in Belton. Jason enjoyed woodworking, riding 4-wheelers, and swing dancing with his sister. More than anything Jason truly loved spending time with his family, especially his boy’s Brandon and J.J.

Jason was preceded in death by his paternal grandparents, Edwin and Doris Fleming, and his maternal grandfather Bud Waldren.

He is survived by his wife, Amie of the home; two sons, Brandon and J.J., both of Lee’s Summit; step-son, Harrison Cortinas of Peculiar, Missouri; step-daughter, Katie Cortinas of Pleasant Hill; his parents, J.R. and Deana Fleming of Pleasant Hill; sister and brother-in-law, Jayme and Brad Smith of Belton, Missouri; his maternal grandmother, Emma Waldren, of Springfield, Missouri; nephews, Dylon Smith, Terry James “T.J.” Smith, and Austin Smith; many beloved cousins; other relatives and a host of many friends.

Online condolences may be sent to the family at www.stanleydickeyfuneralhome.com
To order memorial trees or send flowers to the family in memory of Jason Fleming, please visit our flower store.