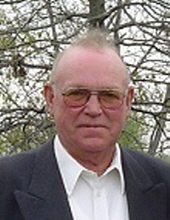 Jerrold “Jerry” William Jenkins, 76, of Garden City, Missouri, was born January 22, 1942, near Creighton, the son of Harold and Harriett (Ruckel) Jenkins. Jerry departed this life in the early morning hours of February 11, 2018, in Kansas City, surrounded by his family, who held his hands and made sure he knew they would see him later.

Jerry was united in marriage to Iona Faye Ice on April 14, 1962. They worked side-by-side building a family and a farm for 55 years.

Jerry worked as a carpenter with Local 777 for 31 years in commercial construction in the Kansas City area. However, Jerry’s heart and soul was in his farm Winsome-Losesome Acres near Garden City, MO. Jerry dedicated every hour to his farm. He loved the land and he loved his cows. The dirt on his boots, calloused hands, and the wear of his jeans were signs of his hard work and service to his family and friends.

Jerry was a proud husband, father, grandfather, and great-grandfather. He enjoyed family dinners and holiday gatherings. Jerry was devoted to Cass County which he called “God’s Country” and preferred to stay close to home. His home, the family who occupied it, and the people who came to visit, were most important to him.

Jerry is proceeded in death by his father, Harold Jenkins, and mother, Harriett Jenkins.

Jerry is survived by his wife Iona, son Brian and wife Dee of Greenville, SC; daughter Jana and husband Jake of Creighton, MO; and son Timothy and wife Diane of Greensboro, NC; grandsons Chase, Tyler, and Preston; great-grandson Arlo and other family and many friends.


The family suggest that memorial contributions may be made to the Shriners Hospitals for Children.
To order memorial trees or send flowers to the family in memory of Jerry Jenkins, please visit our flower store.