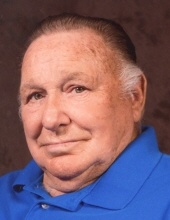 On December 26, 1954, Junior was united in marriage to Barbara Lois Gardner at the Dayton Community Church.

Junior was a lifelong farmer and stockman. He enjoyed going to the sale barn, the outdoors, being on his farm and watching his cows. Junior was a home body and after all of his work was done he would set down and watch T.V. He served the Dayton Community as President of the local school board, board member of the Dayton Cemetery Association for 25 years, member of the Dayton Township Board. Junior accepted Christ as his Lord and Savior at a Revival on August 16, 2004 and became a faithful servant of the Lord Jesus Christ.

Besides his parents, Junior was preceded in death by his three sisters, Dixie Moore, Bernice Burris and Georgia Cumpton.

Junior is survived by his wife, Barbara L. Brown of the home; his two sons, Jesse Brown (Donna) and Randy Brown all of Garden City, Missouri; five grandchildren and eight great-grandchildren; other relatives and a host of friends.

Funeral services will be 2:30 p.m., Saturday, July 11, 2020 at the Dickey Funeral Home, Garden City, Missouri with burial in the Dayton Cemetery near Garden City.

Family suggests memorial contributions may be made to the St. Croix Hospice, Harrisonville, Missouri or the Dayton Cemetery Association.
To order memorial trees or send flowers to the family in memory of Jesse Junior Brown, please visit our flower store.