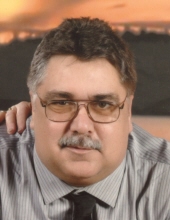 John Bryan Van Black of Harrisonville, Missouri was born May 20, 1965 in Hammond, Indiana the son of Donald Eugene and Shirley Jean (Perrymann) Van Black. He departed this life on Thursday, August 26, 2021 at his home surrounded by love and family at the age of 56 years, 3 months and 6 days.

On July 10, 1983 John was united in marriage to Patricia Leann Graef in Harrisonville, Missouri.

John owned and operated VB Masonry, Harrisonville, Missouri and later was a truck driver for Sutton Trucking, Archie, Missouri. He attended school in Adrian and North Kansas City, Missouri before moving to Harrisonville. John enjoyed spending time with his family and grandchildren the outdoors and fishing. He especially liked to attend his grandchildren's events.

Funeral services will be held Saturday, September 4, 2021 at 11:00 a.m. at the Dickey Funeral Home, Harrisonville, Missouri. Burial will be in the Norris Cemetery, Hartwell, Missouiri.

The family will receive friends Saturday, September 4, 2021 from 10:00 a.m. - 11:00 a.m. at the funeral home.
To order memorial trees or send flowers to the family in memory of John B. Van Black, please visit our flower store.