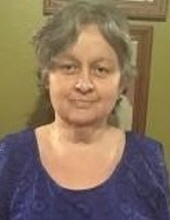 Joyce Fay Anderson, 54, of Pleasant Hill, was born, August 23, 1966, in Warrensburg, the daughter of Marvin A. “Brownie” and Erma F. (Perdue) Brown. She departed this life, Friday, February 12, 2021, at her home surrounded with love and family.

On November 29, 1991, she was united in marriage to Michael Wayne Anderson in Holden.

Joyce was a homemaker and worked for her parents at the A.F. Super Grocery in Holden. Later, after her children went to school, she worked in the lunch room at the Pleasant Hill Elementary school. She was a former member of the New Hope Baptist Church in Holden and was a current member of the Faith Baptist Church in Lee’s Summit. She enjoyed working in the yard and spending time with her family; especially her grandchildren Asher and Ever.

She is survived by her husband, Mike of the home; three children, Benjamin (and Melissa) Anderson, Becky (and Andrew) O’Neill, and Jordan Anderson, all of Pleasant Hill; her grandchildren, Asher and Ever, both of Pleasant Hill; her step-mother, Wanda Brown of Holden; three brothers, Mike (and Janis Brown) of Warsaw, Donnie (and Liz) Brown of Holden; and David (and Scott Manley) Brown of Lee’s Summit; one sister, Nancy (and Terry West, Jr.) Brown of Lee’s Summit; other relatives and friends.

The wearing of masks is strongly encouraged while in attendance at the visitation and funeral service.