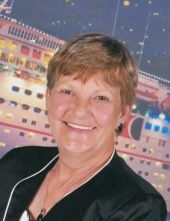 Julia Lucille Jackson, Harrisonville, Missouri, was born April 17, 1949 in Kansas City, Missouri the daughter of Jack and Opal Wilson. She left this life on July 9, 2020, at her home.

Lucille work for many years as a waitress at Mama Tios in Kansas City. Working hard to support her family, Lucille made the decision to return to school and earned a Bachelor’s and Master’s Degrees in Social Work. Upon receiving her degree, Lucille began working at the Division of Family Services, having many roles there including being a child investigator. After working for the Division of Family Services for 19 years, Lucille retired to enjoy her life at home, to travel with friends and to enjoy her grandchildren.

Besides her parents, she was preceded in death by her husband, Carl Jackson on October 25, 2006; two brothers, Franklin Starforth and Tom Starforth.

The family received friends Thursday, July 16, 2020 at the funeral home.

Family suggests memorial contributions may be made to St. Jude’s Children’s Hospital.
To order memorial trees or send flowers to the family in memory of Julia Lucille Jackson, please visit our flower store.