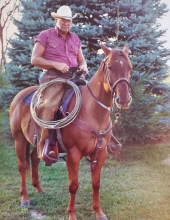 Kevin L. Morris was born May 14, 1934 at the Ross family farm south of Creighton, Missouri.
He departed this life on Saturday March 27, 2021 surrounded by his family in his home south of Creighton. He was 86 years old.

Kevin moved to Venice California at the age of 7, his dad was a welder for Douglas Aircraft during the war. They moved back to the family farm in Creighton after the war. Kevin went to Creighton high school where he was an avid basketball player. He graduated in 1953.
Kevin was united in marriage to Wanda Jo Nay on November 27, 1955. He was a member of the Creighton Baptist Church. Kevin was drafted into the Army on March 11, 1957. While in the army, he drove a tank. He was honorably discharged on Feb 28, 1963. Kevin and Wanda purchased part of the family farm. He was blessed with four wonderful children, Barbara, Beverly, Russell and John. Kevin was a cattleman and a farmer. He owned and operated Morris Trucking. He hauled water and he hauled livestock to the Kansas City Stockyards until they shut down, then he hauled to and from local sale barns until he retired in 2011. Kevin was always up for a game of burn out in the yard, or always happy to help catch a horse for the kids. For many years he hauled horses for the Creighton Wrangler’s Saddle Club to the American Royal parade. He loved watching Barbara play basketball and he enjoyed watching the high school boys play basketball. Kevin enjoyed being in the hayfield with the boys during hay season and liked mowing pasture as late as last October. He was united in marriage to Mary Helms in 1983 to that union he gained three more daughters. Jan, Susie and Dorothy. He was loved by many grandchildren and great grandchildren

Kevin was proceeded in death by his parents Russell H. and Naomi Morris; two brothers. J. L. and Keith and a baby sister Imogene.

Funeral arrangements are under the direction of the Dickey Funeral Home, Harrisonville, Missouri.
To order memorial trees or send flowers to the family in memory of Kevin L. Morris, please visit our flower store.