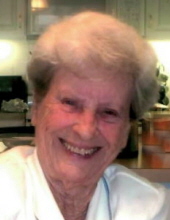 Loretta Marie Bunch, 92, of Belton, was born, October 25, 1925, in Stockton, Kansas, the daughter of Arthur (Artie) and America (Williamson) Sudduth. She departed this life, Monday, April 30, 2018, at the Carnegie Village Senior Living Community.

Marie was a homemaker. She was a member of the Bethlehem Lutheran Church in Belton. She loved cooking, crocheting, and sewing. She especially loved spending time with her children and grandchildren.

Memorial contributions are suggested to the Kansas City Alzheimer’s Association and may be sent in care of the funeral home.

Online condolences may be sent to the family at www.stanley-dickeyfuneralhome.