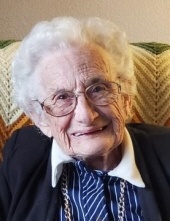 On July 12, 1944, she was united in marriage to Wilbur Crayton Beghtol in Springfield, Missouri. He preceded her in death on January 23, 2012.

Louise started her career working as a Beautician in Fairfield, Iowa. After moving to Missouri she was employed at AT&T in Lee’s Summit retiring on March 31, 1983. She was a member of the Strasburg Baptist Church, Order of the Eastern Star, the AT&T Pioneers, and was life member of the V.F.W. Post #3118 Auxiliary. She enjoyed sewing, crocheting, knitting, eating out, sitting on the front porch at the lake, and spending time with family.

She was also preceded in death by her parents and two brothers, Charles Ray Warren and Albert Clifford Warren.

She is survived by one grandson, Bary Dwayne (and Bob Jackson) Porter of Gravois Mills, Missouri; one great grandson Austin MacGyver (and Julia) Porter of Blue Springs, Missouri; other relatives and friends.

Private graveside services was held in the Pleasant Hill Cemetery.

Memorial contributions are suggested to the Laurie Care Center and may be sent in care of the funeral home.