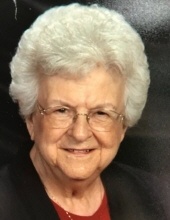 On October 26, 1952, she was united in marriage to Donald Dean Teegarden in Kansas City, Missouri. He preceded her in death on October 31, 2009.

Jean was employed as a Dental Assistant; later becoming a full time Homemaker. She was an active member of the Big Creek Baptist Church. She enjoyed playing cards, quilting, working crossword puzzles and going out to eat with family and friends.

She is survived by three daughters, Denise (and Rick) White, and Linda (and David) Day both of Lee’s Summit, and Anita (and Michael) Bleich of Leawood; six grandchildren, Jennifer (and Andrew) Truman, and Alyson (and Jesse) James both of Leawood, Jeremy (and Robin) Beach of Shawnee, Michelle (and Gus) Volkmer of Blue Springs, Tamara (and Tim) Atwell of Lee’s Summit, and Jacob Bagby (and Abboud ) of Lenexa; eight great grandchildren, Jackson, Garrison, Grady, Timothy, Levi, Caiden, Samuel, and Lochlyn; several nieces and nephews; other relatives and friends.

Memorial contributions are suggested to the St. Jude’s Children’s Research Hospital and may be sent in care of the funeral home.