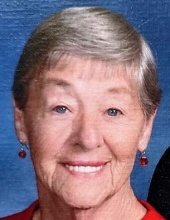 Margaret Lavonna Vaughn, 88, of Harrisonville, was born, July 27, 1932, on the family farm south of Pleasant Hill, the youngest daughter of William Henry and Frieda Ann Bertha (Saathoff) Maynard. She departed this life, Saturday, July 24, 2021, at the St. Luke’s East Hospital in Lee’s Summit.

On April 9, 1950, she was united in marriage to Bernie Clifford Vaughn in Lee’s Summit and to this union two sons and one daughter was born. He preceded her in death on February 13, 2016.

Margaret was employed as a waitress in Pleasant Hill for a while and in 1961 went to work at Western Electric in Lee’s Summit. Later she worked for Ruperts Manufacturing in Blue Springs until she had to take leave because of her Rheumatoid Arthritis.

Margaret and Bernie lived on a farm west of Pleasant Hill for 55 years. In June of 2006 they sold their farm and bought a home in Harrisonville. They spent the winter in Panama City Beach, Florida for 23 years. She was a member of the Pleasant Hill First Christian Church where she served on the Diaconate. She truly enjoyed her church and her Christian Women’s Fellowship. She was also a member of the Ivy Leaf Chapter #215 Order of the Eastern Star, the Homemakers Hobby Club. She enjoyed going to the Community Center in Harrisonville with her friends to exercise, swim, and eat meals. She also loved reading and crocheting different things for her family and friends and playing Bunco.

Memorial contributions are suggested to the Arthritis Foundation and may be sent in care of the funeral home.