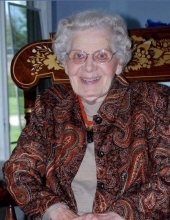 Marie Hartzler, 102, of Raymore, Missouri died May 27, 2021, at Crown Care Center in Harrisonville, Missouri. She was born July 20, 1918, the daughter of Hial H. and Ada (Wagner) Miller of East Lynne, Missouri. She received a B.S. in Education from Central Missouri State Teachers’ College (Central Missouri University) in Warrensburg, Missouri, and went on to teach elementary school, first in a rural one room schoolhouse and later in the Hickman Mills school district. In 1947 she married Ralph D. Hartzler and they made their home in Kansas City. Marie and Ralph moved to Raymore, Missouri in 1971, with their sons Daniel and David. She retired in 1982 after many years teaching first grade at Truman Elementary School. Marie continued to live in her home in Raymore following Ralph’s death in 2002, enjoying her family and friends, until she was 102, when she moved to Crown Care. She was a member of Grandview United Methodist Church, and later St. Paul’s United Methodist Church in Raymore.

Marie was a loving daughter, sister, wife, mother and grandmother. She was a friend to many and a life-long learner. She was a woman of deep faith, genuine compassion and kindness. Her life was a blessing and an example.

The family would like to thank all those who took time to stay in touch with her including friends, family, and former students. Special gratitude is owed to her devoted neighbors John and Joann Culley. Her ability to live independently for many years was in part thanks to their gentle care.

Cremation. A Memorial Graveside service will be beld Sunday, June 13, 2021 at 2:00 p.m. at the Clearfork Cemetery, Garden City, Missouri.

For those who would like to honor Marie with a donation to an educational charity, please consider Bright Futures Harrisonville, 503 S. Lexington, Harrisonville, MO 64701, or online at
https://harrisonvillepublicschoolfoundation.networkforgood.com/projects/33254-bright-futures-harrisonville.

Funeral arrangements are under the direction of the Dickey Funeral Home, Harrisonville, Missouri.
To order memorial trees or send flowers to the family in memory of Marie Hartzler, please visit our flower store.