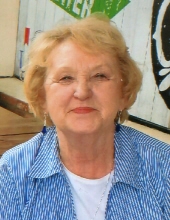 Mary Jane Richardson of Overland Park, Kansas was born November 5, 1943 in Kansas City, Missouri the daughter of Joseph Francis and Ellen Ruth (Moore) Pence. She departed this life on Sunday, January 19, 2020 at Menorah Medical Center, Overland Park at the age of 76 years, 2 months and 14 days.

On July 3, 1965, Mary was united in marriage to Jack Richardson Sr. in Kansas City, Missouri.

Besides her parents, she was preceded in death by her husband, Jack Richardson Sr. on April 30, 2003 and 5 siblings.

The family received friends Wednesday, January 22, 2020 at the Dickey Funeral Home, Harrisonville, Missouri.
To order memorial trees or send flowers to the family in memory of Mary Richardson, please visit our flower store.