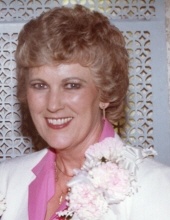 Mattie Pearl (Terrell) Rork of Harrisonville, MO, was born December 14, 1935 in Bula, Texas. The daughter of Lonnie Doyle and Veda Marie (Young) Terrell, Mattie was raised in Sudan, Texas. She departed this life on Tuesday February 9, 2021 at Crown Care Center, Harrisonville, MO. She was 85 years old.

On July 19, 1994, Mattie was united in marriage to Bobbie Don Rork in Oklahoma City, Oklahoma.

Mattie lived a good portion of her life in Oklahoma and Texas, and she worked many years as a manager in hospitals and physician offices. Mattie was a fun and loving woman with an out-going personality. She enjoyed spending time with numerous friends, dancing a two-step, decorating her home with her many crafts, and filling the holidays with her delicious candies. However, her greatest joy was her children and grandchildren. Among her fondest memories was a romantic trip to England and France with her husband Bob. In the late 1990’s, Mattie and Bob moved to the Harrisonville area to be closer to her daughter and grandchildren, although she enjoyed visits from her son and grandchildren still in Texas.

Mattie was preceded in death by her devoted husband Bob Rork, her parents, her two older brothers who passed at a very young age, and numerous aunts and uncles to whom she was very close.

Mattie was a wonderful mother and grandmother who will be dearly missed. She was a Christian woman and now rests in Heaven with her Lord and Savior, Jesus Christ—the true and most perfect blessing of her life.

Cremation. A private family celebration of life service will be held at a later date.

Funeral arrangements are under the direction of the Dickey Funeral Home, Harrisonville, Missouri.
To order memorial trees or send flowers to the family in memory of Mattie Pearl Rork, please visit our flower store.