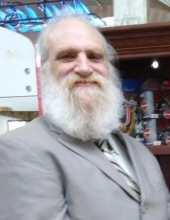 Max Douglas Overbey was born December 3, 1963 in Clinton, Missouri the youngest son of Max Eugene and Glenna Jean Overbey. He attended school in Harrisonville where he graduated in 1981. Doug enjoyed sports including hunting, fishing, swimming, and water skiing. He really loved the outdoors and spent many happy hours with his cousins on their family farm near Mound City, Kansas.

At a very young age, he met and married Kelly Ann and joined the U.S. Army. After he was discharged, he began working for Calmar Industrial Corporation in Lee’s Summit, Missouri and enrolled in night school at Longview Community College, majoring in the field of electronics. Doug later joined the family business where he was in charge of maintenance and repair of housing units. He was highly skilled in most technical areas and did precision finish work.

His “biker name” was given to him at a very young age by his “big brother” who nicknamed him “Buzzard.” The moniker stuck. Buddies near and far knew him as Buzzard and he usually introduced himself to new peers that way. Throughout his life, Doug was family oriented and enjoyed spending time with his brothers, who were his best buddies.

He was always fascinated by the idea of owning, building, and riding motorcycles. He was injured in a previous motorcycle accident in 1992, where he lost his left knee joint, crushed his left hand, and injured his back. However, he continued to be determined to rebuild his bike and get into the wind.

He was the proud father of twin children, Frank Douglas Overbey of Grain Valley, Missouri and Jessica Sue Overbey of Archie, Missouri. Doug met his dearest friend and companion Darla Sue Worsley in 2016 and together they began their quest for knowledge and salvation through Bible study each morning at home and became members of the Life Church in Lee’s Summit, Missouri for Sunday worship.. Doug was a dedicated Christian who always tried to help others in need, often at the expense of his own well being. Where many rescued stray dogs and cats, Doug rescued wandering, needy soles. He will be sorely missed by all who knew and loved him.

He was preceded in death by his father Max Eugene Overbey and his brother, Dennis Ray Overbey.

Funeral services will be 2:00 p.m., Thursday, April 1, 2021 at the Dickey Funeral Home, Harrisonville, Missouri with burial in the Urich Cemetery, Urich, Missouri.
To order memorial trees or send flowers to the family in memory of Max Douglas Overbey, please visit our flower store.