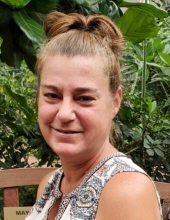 Megan was a 1995 graduate of Century High School in Santa Ana; she went on to earn her associates degree at Santa Ana Community College.

On July 4, 2004, she was united in marriage to Jeffrey David Lara in Santa Ana, and to this union two daughters, Emma and Isabella, were born. He preceded her in death on August 18, 2011.

Megan was employed as a Special Education Aide for the Orange Unified School District in Orange, California, and later for the Pleasant Hill Middle School. She enjoyed reading, painting, creating jewelry, collecting butterfly items, trips to the family cabin, and traveling. She also was an avid Anaheim Angels fan as well as the Kansas City Royals and Chiefs. Her favorite foods were her Mom’s hot wings, vegetarian burritos, and Tapatio hot sauce. She carried a bottle of Tapatio with her everywhere she went. She especially loved spending time with her girls and her dog Elsa.

Megan was also preceded in death by her stepfathers, William A. Flint and Gordon W. Warnock.

She is survived by her two daughters, Emma Frances Lara and Isabella Grace Lara of the home; her mother, Barbara Warnock of the home; her father and stepmother, Don and Candy Jackson of Bloomingdale, Michigan; one sister, Ana Malisa Jackson of Peculiar, Missouri; her niece, Ava Malisa Jackson-Barnhouse of Peculiar; her boyfriend, Robbie Isaman of Pleasant Hill; other relatives and friends.

Memorial contributions are suggested to Emma and Isabella’s education fund. Make check payable to Barbara Warnock and mail in in care of the funeral home.