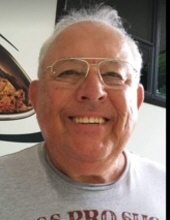 Michael “Mike” Roy Whaley of Peculiar, Missouri was born March 23, 1947 in Springfield, Missouri the son of Roy Ancil and Novagene (Wollford) Whaley. He departed this life on Thursday, November 25, 2021 at his home at the age of 74 years, 8 months and 2 days.

On July 18, 1972, Mike was united in marriage to Katherine Jane Carter in Springfield, Missouri.

Mike was a veteran of the U S Navy attaining the rank of Petty Officer 2nd Class (IC2 – E-5). He served during the Vietnam era on the ship U S S Sandoval out of Norfolk, VA. After his tours of active duty, he remained active with the U S Naval Reserve for many years.

Mike began his life long career in railroading with the St. Louis-San Francisco Railway in 1968 when he hired on as a machinist in the Springfield, MO shops. He advanced to a supervisor position in the 1980s. After the Frisco merged with Burlington Northern Railroad Mike and his family were transferred to Minneapolis, MN. In 1995 an opportunity to move to Kansas City appeared and they were able to move closer to family. Mike retired in 2004 as the supervisor of the Burlington Northern Santa Fe Reliability Center in Argentine, KS.

He joined the Springfield Police Department Reserve in 1972. As a reserve officer, he worked alongside the regular force helping to fill in and provide support for everyday duties such as patrolling, large event control, and public awareness.
He was an avid fisherman and enjoyed boating and camping. As an active member of Crappie.com he attended many events where he made great friends. After retirement he found an interest in BBQ cooking and contests. He was a KCBS Certified BBQ Judge and participated in several American Royal contests with friends. He also helped found a live fire BBQ website ‘The Q Joint’ where like-minded enthusiasts shared cooking tips and recipes.

In 2006, following in a long time family tradition of making apple butter, Mike bought a 30 gallon copper kettle and a new era was begun. With the help of family, friends and neighbors every year apples were peeled, cooked and canned to produce an average of 200 pints of delicious apple butter. Everyone attending received a share. In 2021 Mike entered the apple butter in the Missouri State Fair and was awarded ‘First Premium’ ribbon with a grand prize of $8.00. It was never about the money only the fun, camaraderie and keeping a tradition alive.

Besides his parents, he was preceded in death by a brother, Thomas Whaley and first wife, Edwina Ann Anderson.

Family suggests memorial contributions may be made to Visiting Nurse Association, 1500 Meadow Lake Pkwy, Kansas City, MO 64114 or may be left at the funeral home.
To order memorial trees or send flowers to the family in memory of Michael Roy Whaley, please visit our flower store.