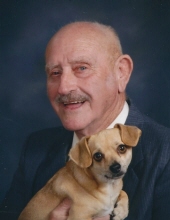 Mr. Nelson Wayne Olinger, 86, of Odessa, MO, passed away on April 7, 2018 surrounded by family, friends, and his four-legged best friend, TC. He was born in Westervelt, Illinois on September 30, 1931, to Lawrence and Mary (Bessie) Olinger. He graduated from Beecher City High School in 1949, then went on to serve in the United States Air Force from 1951 to 1955. He also farmed from 1955-1965 while working at Fedders and later at St. Anthony’s Hospital in Effingham, IL. In 1966, he joined the Air Force Reserves & Civil Service. He was also a Pastor at Dayton Community Church (1975-1988), and Austin Baptist Church. He retired on September 30, 1991 and traveled the United States in his RV with his wife full-time and was also ministering with Campers on Mission before settling down indefinitely in Odessa, MO in 2008.

Nelson was a loyal husband, father, grandfather, great-grandfather, & great-great-grandfather. He always made sure his family’s needs were taken care of, no matter the cost. He was always there to offer a helping hand, advice, wisdom, and guidance, even if he didn’t agree with one’s decisions. He wasn’t a sentimental man, you didn’t hear him say, “I love you” but you knew without a doubt he did. He loved his family gatherings, that’s when you’d see him smiling the most. He always counted how many of his loved ones made it to each
gathering and announced it with pride.

On July 12, 1952, Nelson was united in marriage to Ella Lou Fine in Archer City, Texas. His wife of 57 years preceded him in death on December 2, 2009. He was also preceded in death by his sister, Charlotte Rose M. Olinger and brother, Marvin Leroy Olinger.

Nelson saw the absolute best in everyone. He never turned his back on anyone and instead gave them the benefit of the doubt when they made poor choices. He was the kind of man who gave his last dollar and the shirt off his back to anyone in need. He never knew a stranger and welcomed everyone in as if they were family. He loved to make people laugh by telling jokes, or funny stories of his past. He was always found making conversation with just anyone no matter where he was, and everyone loved him. He was full of life and spent his days walking his beloved dog, TC, around town daily or hanging out at the Odessa Senior Center. He loved to talk about the Bible and discuss the Lord, He lived to please the Lord.
His family misses him terribly, but they are also excited knowing that he is reunited with the love of his life, Ella, joking around in God’s kingdom without pain or suffering.

In lieu of flowers, please consider donating to Helping Hands of Odessa, MO or Dayton Community Church of Dayton, MO.

The family extends a special thanks to Integrity Hospice and Dickey’s Funeral Home.
To order memorial trees or send flowers to the family in memory of Rev. Nelson Wayne Olinger, please visit our flower store.