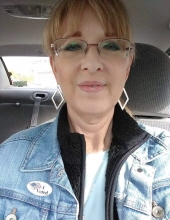 Rhonda Kay Hedges, 57, of Rogers, Arkansas was born March 19, 1964. She departed this life
on Sunday, September 5, 2021, surrounded by loved ones at Mercy Hospital in Rogers,
Arkansas.

Rhonda was the oldest daughter of James Wittrig and Donna (Smith) Yoder. Rhonda grew up in
Garden City, MO and graduated from Sherwood High School in 1982. While in high school,
Rhonda enjoyed drama club, band, flag corp, and took many business classes. As the oldest of
five siblings, Rhonda was always willing to lend a hand in any way, helping with dinner, baking
pies, babysitting siblings, and keeping things organized. Her organization skills carried on all
throughout her life.

Rhonda and Jeff became high school sweethearts after she asked him out on their first date.
On October 2, 1982, Rhonda was united in marriage to Jeffrey L. Hedges in Collins, Missouri.
Rhonda and Jeff were blessed with three children, Amanda, Ashley, and Eli.

In 1983 Rhonda began working for WSP in Harrisonville, MO. When the company relocated to
Rogers, Arkansas in 1989, Jeff and Rhonda moved their family to Rogers, where they raised
their family and it became their home. Rhonda worked for WSP for nearly 40 years, working her
way up through the company, and eventually becoming a Project Manager.

Rhonda never met a person that she couldn’t connect with and befriend in some sort of way.
There was not a craft that she could not master. Over the years she learned and thrived at
quilting, basketmaking, card making, cups, scrapbooks, and many many more crafts. One of
her favorite places to go was Hobby Lobby! Rhonda never forgot a birthday or special
occasion, and her handmade cards were something you could always look forward to. It was
also not uncommon to receive a random package in the mail with something she had made by
hand with love and care. In 2016, Rhonda began using essential oils, which led to a new way of
life, as well as new friends and connections that she truly treasured. No matter what Rhonda
was doing, she would drop everything for her grandkids. Video chats at any time of the day with
Grandma, helping with baking, reading stories, and playing with her grandkids were something
that she truly cherished. Jeff and Rhonda were active members of Calvary Chapel of the
Ozarks.

Rhonda was preceded in death by her parents and a sister, Rachel (Yoder) Pullen.

Rhonda will be dearly missed and she will continue to live on in all of our hearts.

Funeral services will be 10:30 a.m., Saturday, September 11, 2021 at the Sycamore Grove Mennonite Church near Garden City, Missouri with burial in the Clearfork Cemetery near Garden City.

Family suggests memorial contributions may be made to the Susan G. Komen Foundation.

Funeral arrangements are under the direction of the Dickey Funeral Home, Harrisonville, Missouri.
To order memorial trees or send flowers to the family in memory of Rhonda Kay Hedges, please visit our flower store.