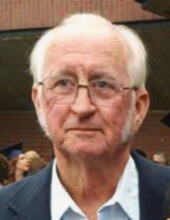 Robert graduated from Harrisonville High School in 1964. After High School he joined the Navy. He was a Machinist Mate on the U.S.S. Ranger. He was a Vietnam Veteran. After the Navy he attended Central Missouri State College now known as University of Central Missouri. He graduated with a Bachelor of Science in Agriculture Business in 1972. He then worked on the family farm. He also worked for Cass County in the Assessor’s Office and then as Zoning Director until he retired in 1999. After his retirement he raised Cattle on the Farm. He also Drove the athletic bus “Big Blue” for Harrisonville High School until his health stopped him in December of 2019. He truly loved driving the kids around to all their games. He truly believed in the statement “Once a Wildcat, always a Wildcat”. Even after his health prevented him from attending the High School games, he continued to watch all the games he could on 4 Tees. He was also a member of the Harrisonville Honor Guard, a service he was truly proud of and the Harrisonville Kiwanis Club. Robert never met a stranger and had a smile and a story for everyone.

Besides his parents he was preceded in death by a brother Samuel Arthur Prettyman and a Niece Lori Wimsatt McGee.

Funeral services will be 10:00 a.m., Tuesday, August 10, 2021 at the United Methodist Church, Harrisonville, Missouri. Burial will be in the Brown Cemetery, Harrisonville with Military Honors.

If you are attending the services please practice social distancing and face mask are recommended.

Funeral arrangements are under the direction of the Dickey Funeral Home, Harrisonville, Missouri.
To order memorial trees or send flowers to the family in memory of Robert Brown Prettyman, please visit our flower store.