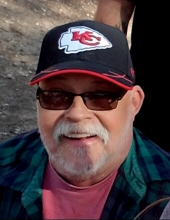 Robert Dale Slinger, 64, of Harrisonville, was born, October 9, 1953, in Kansas City, Missouri, the son of Bobbie Lee Slinger and Bonnie (Tabler) Slinger. He departed this life, Tuesday, January 9, 2018, surrounded by love at the Research Medical Center.

On October 8, 2011 he was united in marriage to his girlfriend of 16 years Evelyn (Eve) Fay Skinner in Harrisonville, Missouri.

Robert was employed at Wal-Mart for 17 years where he retired in 2016.

Robert was a lover of life. He was an avid Chiefs and NASCAR fan who enjoyed his dogs, fishing, cooking and riding his motorcycle. While he enjoyed many things, he enjoyed nothing more than having a good time and an ice-cold beer with family and friends.

In lieu of flowers the family suggests memorial contributions to the Harrisonville Animal Shelter. Some of Roberts most beloved possessions were his dogs.
To order memorial trees or send flowers to the family in memory of Robert D. Slinger, please visit our flower store.