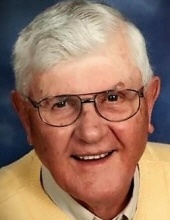 Roger Alan Little, 85, of Pleasant Hill, Missouri, was born, August 28, 1934, in Louisville, Kentucky, the son of Arthur Edward and Rachel Angeline (Head) Little. He departed this life Tuesday, April 21, 2020, at the Villages of Jackson Creek Memory Care surrounded with love and family.

Roger was a 1952 Atherton High School, Louisville, Kentucky, graduate. He attended Georgetown University, finishing with his Bachelors at the University of Louisville. He later earned his Master’s in Education from Murray State University in Murray Kentucky. While in college he served in the United States Naval Reserve.

On August 3, 1957, he was united in marriage to Camille B. Christopher in Somerset, Kentucky.

Roger was first employed as a middle school teacher in Owensboro, Kentucky. After earning his master’s degree, he was employed as a school administrator in the Litchfield, Illinois, Kirksville, Missouri, Heyworth, Illinois, and Clinton, Illinois, school districts. He was a former member of the Kiwanis club and was a member of the Pleasant Hill United Methodist Church. He enjoyed photography, woodworking, singing, and was an avid birdwatcher.

Roger was preceded in death by one daughter, Sarah Rachel Little on July 21, 2019; his parents; and three brothers, Arthur Little, Jr., Jerry Little, and Dohn Little.

A celebration of Roger's life will be held 11:00 a.m. Saturday, September 12, 2020, at the Pleasant Hill United Methodist Church. Reverend James Stanfield-Meyers will officiate.

Visitation will be held from 10:30 a.m. until service time at the church.

Due to the ongoing Pandemic it is suggested that masks be worn while in the church.

Memorial contributions are suggested to the Pleasant Hill United Methodist Church and may be sent in care of the funeral home.