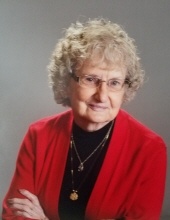 V. Ruth Hemenway, of Raymore, Missouri was born January 30, 1931 in Collins, Missouri the daughter of William Lovel and Mary Mae (Baumgarden) Carpenter. She departed this life on Tuesday, September 8, 2020 at St. Luke’s Hospital, Kansas City, Missouri at the age of 89 years, 7 months and 9 days.

Ruth was a seamstress and made custom drapery. She was a licensed funeral director and was employed by Snow Funeral Home, Urich, Missouri. Ruth was an active member of the First Christian Church, Pleasant Hill, Missouri. She was a very independent, active lady who still drove herself around. Ruth was an avid reader, and enjoyed making quilts for her family as gifts. She loved traveling and spending time with her grandchildren and great-grandchildren. Ruth made it a point to water ski with all of her grandchildren, which was something that she was incredibly proud of and grateful for.

Besides her parents, she was preceded in death by her husband Charles Hemenway on November 16, 2014; a son, Rex Coulter; a grandson, Jeff Coulter and 6 siblings.

Funeral arrangements are under the direction of the Dickey Funeral Home, Harrisonville, Missouri.
To order memorial trees or send flowers to the family in memory of Ruth Hemenway, please visit our flower store.